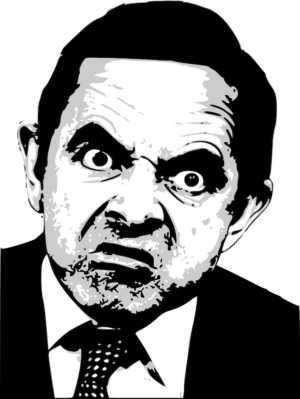 A critique of Johnny English as an inferior James Bond lacks the comic style of actor Roger Moore.

The return of the new Johnny English (the poor actor’s James Bond) attempt at making us laugh in the movies’ aisles is a disaster. Only minutes into the movie I was already wondering why they bothered. More to the point why I bothered go to see such a lot of tosh when I could have seen Roger Moore as James Bond who certainly is a better actor anyway.

The answer is of course: FOLLOW THE MONEY TRAIL. Yes apparently the first two Johnny English movies were money-spinners for the actor and producers. So as is the case with the boring movies business, sequels prove time and again that they’re best to avoid. How many times do we see the cliche of sequels popping up with a terrible, often compromised script, a tired and contract-burdened actor, and a production unit that is going through the motions.

As a result Emma Thomson plays a token Theresa May, echoing the famous actress role of the authoritarian figure of actor Judi Dench’s relatively recent MI6 chief from the James Bond series. The movie squanders any possibility for potentially anarchic comedy settling for a ‘safe’ and conventional-don’t-upset-anyone-standard and falls into the trap of cheap pastiche. So much money and what a waste.

I suppose all across the world are fans of the actor who presume that anything Rowan Atkinson does is as funny as Mr. Bean. I personally was never so impressed with Mr. Bean either as I never felt that the actor Atkinson respected those characters which he portrayed, and so, indulging in an arrogance of his actor self his performances left me cold. Someone came up with the idea for Atkinson to play James Bond – himself I can imagine, as comedians eventually become fed up with never getting the girl. A tragic stereotype which leading men often tragically suffer from.

John Cleese expressed that so well after Fish called Wanda saying how else am I going to get to star opposite a beautiful actress like Jamie Lee Curtis if I don’t write the script myself? NO WAY it can happen ! But Fish called Wanda was a great movie, whereas this Johnny English Strikes Back film is turgid. This film sets out to parody the Bond movie genre but ends up trying to compete with it. Which means of course the parody can easily turn into a damp squib.

For me the Roger Moore Bond movies were the best parodies anyway as Roger Moore, the actor, could play either the real thing – stirred not shaken – or Bond with his Martini tongue well shoved into his actor’s cheek – he always managed to achieve that double edge in all his James Bond movies. Atkinson, alas, comes a poor second here to Roger Moore.

I can’t say too much about the other actors apart from the fact they try hard – maybe too hard – and I must say, apart from the Virtual Reality scene, which is mildly amusing at least, I more or less forgot everything the actors presented by the time I got home.

Non-English movies have been embraced in the recent years by the public more and more as Hollywood and the English equivalents continue to try to satisfy the public with cliched successfully-proven script-styles. Recently acclaimed movies Roma, Parasites, Men and Chickens are just three excellent examples of movies which deal with reality in an inventive way and all break away from the expected and predictable series of events which modern script teachers seem to regard as important steps in the USA and UK story-telling process.

James Bond with actor Roger Moore playing the suave British spy was in the heyday of post-war Hollywood when movies could still laugh at themselves.

This maybe since the actor, Atkinson, looks suddenly very old to this viewer. His face shows some signs of a botched uplift and he has as much interest in the plot of the movie as a used condom might have. So many times it looks like he’d rather be sitting at home by a large fire watching a better movie like Roger Moore’s version of James Bond for example.

So now we have an actor – Daniel Craig – already too old for his next Bond movie and an ageing actor, Atkinson, also too old for the James Bond parody. What next for ageing British institutions I wonder? When investors finally start to fund projects of serious creativity to help understand the world we live in or ideally to improve it, and not rehash movies like the extended version of crap TV then we will be for sure laden with more of this kind of junk.

I also don’t hold much respect for comedians and script writers who use the lazy solutions as way of boosting credibility for a cheap idea or concept. Using internationally famous icons like Superman, James Bond or Dracula to cover the weakness of a script gets little respect from me anyway. The solution to find a truly novel character is much more laudable, but so often how many times do we see the cheap road to solve a script problem using such easily recognisable images? Johnny English makes no attempt to be free of the James Bond comparison, apart from the name, which seems so contrived to gain foreign support for the film.